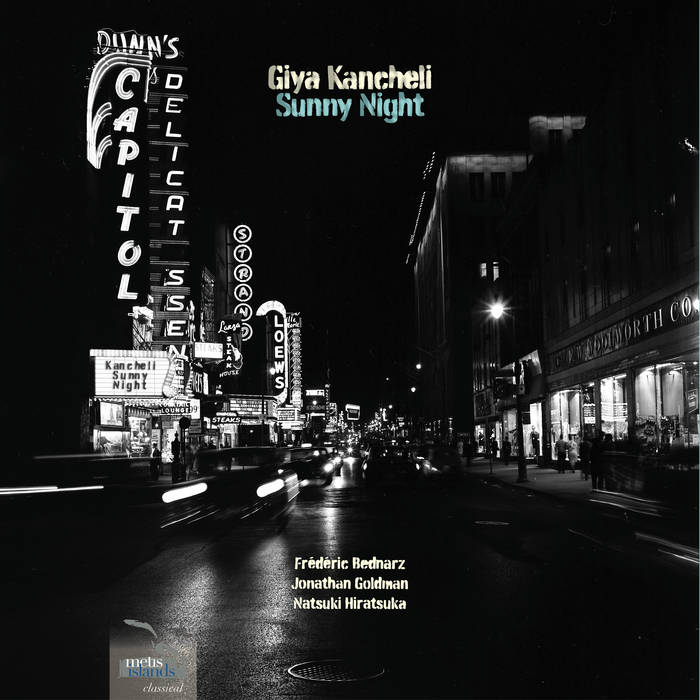 We have decided to share with you five tracks in 24-Bit , 96.0 kHz - Stereo from this release. The album features the melancholic, bittersweet, yet luminous and hopeful music of the great Georgian composer Giya Kancheli (1935-2019).

“Music, like life itself, is inconceivable without romanticism. Romanticism is a high dream of the past, present, and future-a force of invincible beauty which towers above, and conquers, the forces of ignorances, bigotry, violence, and evil.” Giya Kancheli

Artistic Quality: 10 Sound Quality: 10
You’re in a café, a quiet little out of the way place. The sudden sound of violin and piano, perhaps later a bandonéon, playing a sweet, romantic tune creates the perfect atmosphere for evening romance, contemplation, or just enjoying the wine and the solitude (sound clips). This is not the sort of music you might expect from Georgian composer Giya Kancheli, who most listeners know for his symphonic works or more “serious” chamber pieces, but then, most listeners probably are not aware of Kancheli’s extensive contributions as a composer of music for theatrical plays and film. Nor might they be familiar with his several dozen arrangements—”miniatures” for violin and piano, or for solo piano—of selections from that repertoire, which provided the material for this recording.
We hear pieces from plays and films such as Hamlet, Don Quixote, As You Like It, Twelfth Night, King Lear, Waiting for Godot (En attendant Godot), The Caucasian Chalk Circle, and The Eccentrics. The mood, generally, is mellow, wistful, dreamy, with a sometimes pop-style/jazzy edge à la Michel Legrand or Francis Lai. But then, the mood can quickly change, as it does with the pounding piano chords announcing a theme from the film Kin-dza-dza! (sound clip), for which I cannot resist a description: Kin-dza-dza! is a “1986 Soviet-Russian-Georgian sci-fi dystopian tragicomedy cult film,” heralded by more than one critic as perhaps the best science fiction film you’ve never heard of. The story involves a couple of Muscovites (one of whom is a violinist) who get transported to the planet Pluke in the galaxy of the title. It’s certainly not Shakespeare, nor Beckett, but it does make you curious, no? (Not to get too carried away, here, but you can actually watch it online.)
There are a few other mood-shifting moments, including an alternately playfully sensuous and raunchy piece for bandonéon, violin, and piano titled Instead of a Tango, but this is a well-crafted program that invites us into an intimate atmosphere of character and emotion, of beautiful melody sung by violin in its purest, sweetest voice and piano both assertive and seductive. Definitely an unusual disc, but this trio—Frédéric Bednarz (violin), Natsuki Hiratsuka (piano), and Jonathan Goldman (bandonéon)—not only had the right idea in putting this together, but they may have created a demand for more. (Hint, hint.)

​For this reviewer, my relationship with the music of Giya Kancheli (1935- ) began with the symphonies (I think there’s seven now) with the character of some outrageous dynamic contrasts such that they spawned warning levels on the package containing the CD. It was only after that, when ECM began to release the “holy minimalist” type works, that I first heard those.
Now comes Canadian violinist Frederic Bednarz who, along with pianist Natsuki Hiratsuka and bandoneon player Jonathan Goldman have recorded some incredibly lovely chamber music which has not been previously released or widely distributed.
Well its hard to say why these have not been widely heard because they are just beautiful. These are miniatures, all clock in at less than 4 minutes but all have a certain charm that relies neither on the dynamic range or the “holy minimalist” meme. These are simply delightful neo-romantic pieces that could not fail to charm a recital audience. Bednarz clearly knows and loves these little gems. His playing is both sincere and, I think, definitive. In this album he shows this lesser known aspect of the composer’s work. Certainly there have been releases of Kancheli’s chamber orchestra pieces and a string quartet but this is the first recording this reviewer has heard of the violin and piano (and bandoneon) music.
Doubtless there are musical and musicological aspects to this music which escape the average listener (this one included) so no attempt will be made here to analyze these works. Bednarz provides concise but useful liner notes in the gatefold cover to the CD.
Once again our neighbors to the north have scaled the metaphorical art barrier between our adjacent countries to bring this delightful music to light. It is a welcome addition to the Kancheli discography and a delight in your CD player. Whether as calm background or for intense listening this disc is a gem.
N.B. As of this writing the physical disc does not appear to be available from Amazon but it is available through the usual streaming services. If you can get the physical disc it is worth it for the notes though.

New Label. Music of this Time.

Bandcamp Daily  your guide to the world of Bandcamp

New sounds from Mavi, Ivy Sole & Moderator, plus AJ, the One joins the show, for her latest release